Duncan graduated from Strathclyde University with a BSc (hons) in Mining and Petroleum Engineering in 1986. He was a Partner in DLA Piper between 2006 and 2014, specialising in EU and competition law.

When did you qualify?

I graduated from Strathclyde University in Glasgow with a BSc (hons) in Mining and Petroleum Engineering in 1986. On graduation, I began work in IT with Midland Bank (subsequently acquired by HSBC) in Sheffield.

I stayed with the Bank for 10 years and enjoyed it, but after a time began to feel that my interests (and abilities) lay elsewhere so I began part time study at Nottingham Trent University for the Graduate Diploma in Law.

I completed my legal studies in 1996 and joined Dibb Lupton Alsop (latterly DLA Piper) as a trainee solicitor at their Sheffield office. After completion of my training contract in 1998, I moved to DLA’s London office where I specialised in technology law and latterly EU and competition law. I was a Partner in DLA Piper between 2006 and 2014, specialising in all aspects of EU and competition law. 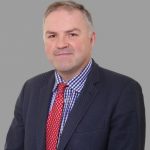