Robert Taylor qualified as a barrister and was called to the Bar of England and Wales in 1999. Having worked for several major technology companies, Robert progressed through the ranks ending his employed career as General Counsel – International for a NASDAQ listed software and gaming company. 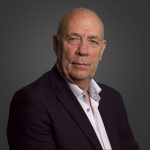